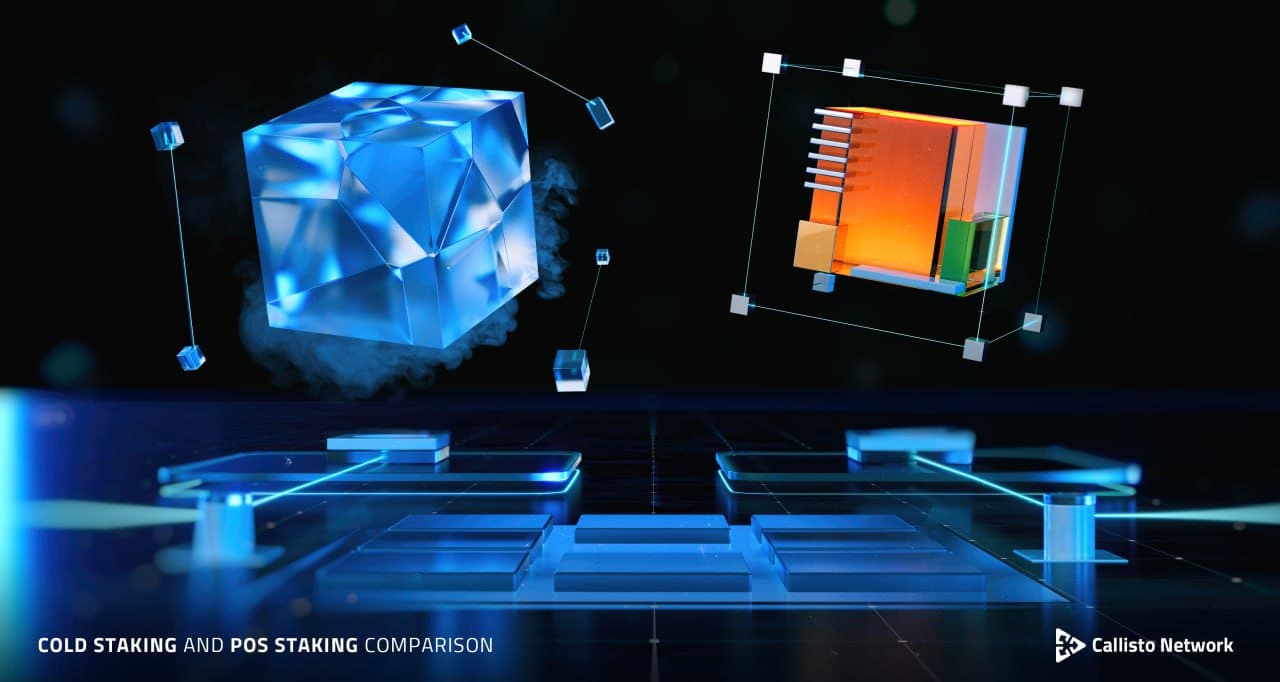 Blockchain is undoubtedly an ingenious technology, which is clearly emphasized by the elegance of the idea and the scale of its use. Isn't it ingenious to link together the distributed ledger technology, a blocks sequence of information linked to each other, and the ability to generate internal accounting units that can be freely transferred to blockchain addresses?

But human thought usually does not stop at the achieved milestones and new ideas appear, for example, to stimulate the accumulation and freeze of funds at a certain address for additional benefits. In this case, we are talking about staking.

We will not talk about income issues, as these values can vary greatly depending on various factors. In this article, we will highlight the technical and practical aspects of using Cold Staking and PoS staking, and touch on their differences.

Briefly and in general terms, we will describe what coins and tokens exist, and what they are used for.

Coins are the internal currency of the networks using blockchain. In addition to the usual sending from address to address, coins can be used to maintain the operation of the network, for example, to pay transaction fees, monitor and account, verify the legality of actions, and on-chain governance.

Tokens are assets that are often issued on top of the existing blockchain. This is clearly seen in the example of Ethereum, Ethereum Classic and Callisto Network, as well as the Tron blockchain. In the presence of the main coin of the network, tokens of various standards, interchangeable and non-interchangeable, are also issued on these blockchains. Such tokens can be used to convey the value, and the most striking examples are the USDT tokens and various NFTs, which led to a real boom and the ability to confirm ownership rights, for example, to any painting.

However, not everything is so clear. There are companies that have developed and launched their own blockchains, where the internal currency is called tokens, for example, a government token and an action token.

What are the ways to get coins?

The internal currency of the networks can be obtained in several ways:

What is crypto staking?

Staking is the holding of funds at specific blockchain address and reward is accrued for such holding of funds. In most cases, staking is used by blockchains based on Proof of Stake (POS). Nodes of such a network are trying to attract users' coins to become validators and block constructors. The more coins a node has, the greater the chance to become a block constructor, and the more likely that the node is to generate a block and receive a reward.

Users must send their coins to the specific address of the smart contract to participate in staking, where coins are frozen for a certain period. Freezing of funds contributes to a more stable coin price and greater attractiveness in the long term.

What is Cold Staking?

Cold Staking is a unique feature by Callisto Network. Cold Stacking is based on an idea similar to that used by Proof of Stake-based blockchains. Users also send the internal currency of the Callisto Network named CLO to the specific smart contract address. However, there is a fundamental difference between PoS-staking and Cold Staking, and it is because Callisto Network uses Proof of Work (POW). In other words, miners confirm transactions and there are no nodes that compete with each other for user funds.

Cold Staking makes it possible to receive passive income for CLO holders. Coins can be locked for a choice from 27 days to a year. After the end of the staking period, a reward is accrued in CLO. Cold Staking is supported by: Callisto Network wallet; Coinomi; Guarda Wallet; Trust Wallet. The current version of Cold Staking 2.0 was launched in May 2021.

Let's talk a little about the differences between Cold Staking and PoS staking from a technical point of view and usability. When designing Cold Staking, the Callisto Network team wanted to create a service that can be obtained without complications in three steps: send funds to the smart contract address; wait for the end of staking; receive funds. Cold Staking is funded because of deductions from the reward for the blocks created by manners. Cold Staking users receive their income in CLO coin. Everything is simple enough. This approach allows miners to simultaneously produce new coins because of mining, which is necessary for Proof of Work, and to restrain the supply of coins in the market.

Things are a little more complicated with PoS staking. Let's look an example of one of the common varieties with using a government token and an action token. Government tokens are directly involved in staking and nodes are trying to attract these tokens, offering holders % of their income. However, it is impossible to send government tokens to the smart contract address or any other blockchain address without some amount of action token. Thus, both tokens are needed. Staking takes place in cycles, the time of which depends on the speed of block creation. The cycle ends after the specified number of blocks has been created. The block creation speed depends on the number of transactions on the network. In other words, the cycle can be completed in two days or three weeks. The maximum duration depends on the limitations specified by the developers. No reward is awarded for the cycle in which tokens were sent to the smart contract address. Funds can be withdrawn only after completion of one or two cycles, depending on the node. Users receive their income in in the action token. Under certain circumstances, a node may not pay a reward, the node reputation will suffer in this case, but this does not stop unscrupulous nodes. Considering the above, it is necessary to take into account the price of the government token, the price of the action token, cycle time, reputation of the nodes, and it also necessary to constantly monitor staking on the chance a node is removed from the network.

In the three years since launch, Cold Staking has proven itself to be a reliable source of passive income for CLO holders. The approach used in Cold Staking does not require constant monitoring during the chosen staking period and in-depth knowledge of the use of the blockchain. However, it is not necessary to oppose PoS staking and Cold Staking, both technologies have the right to develop, as these technologies have proven their effectiveness.